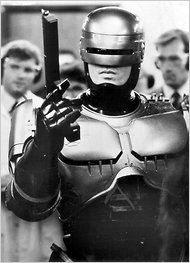 Yet in a city where some of the most prominent buildings have sat vacant for decades and booting a scandal-plagued mayor out of office took eight months, raising $50,000 to produce and install a 7-foot-tall iron replica of the crime-fighting cyborg was accomplished in a mere six days.

Of course, the people of Detroit have their priorities right :)