Automatically cc myself in Outlook

I like to Cc myself in all emails I sent. This has a few advantages over the automatically-stored copies in the “Sent” folder that most email clients create, the most important being that the handling of “Sent” varies significantly from client to client – some store it on the server, some store it locally, some erase it after a while, etc., whereas having a copy in my Inbox means it’s readily accessible and in the same place as other messages from the same thread.

Since I started using Outlook, I’ve been surprised that there is no setting to automatically add yourself to the Cc: field in new message – instead you have to create a rule to add the Cc: after the message is created, as described in many places. The basic instructions can be found here: http://email.about.com/od/outlooktips/qt/et_auto_cc.htm

One variation I made was to exclude the rule when I am already in the recipients list, to avoid being twice in the Cc: field for example (although Outlook seems to automatically eliminate duplicate messages, so this is mostly for cosmetic reasons). I also added a few other addresses (e.g. post@posterous.com) for which I am not interested in keeping copies.

I don’t think this is an ideal solution – I would much rather prefer Outlook to just have a setting for automatically adding myself to the Cc: field, since then it’s easy to remove myself selectively. But given the choices, this works rather well. 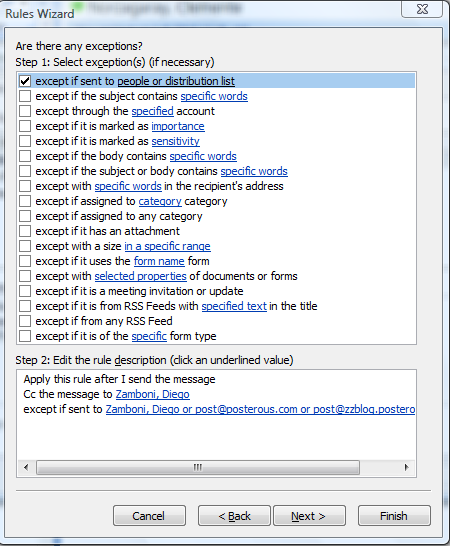